I have lots of good friends at Garvald and I really like the staff.
Andrew Griffin

Andrew says the best thing about Garvald is being with other people and seeing friends, of which he has many. He also says he really likes the staff, who help with his ideas, teach him new skills and, if he is feeling down, help him to cheer up.

When it comes to pottery, Andrew loves to work on new ideas, and develop them into new creations. An elephant he made is now a feature in the garden at Orwell Arts. Colin Ashcroft, the Pottery Workshop leader, is impressed with the contribution that Andrew makes; his enthusiasm inspires other members.

David Giffin, Andrew’s father, says Garvald Edinburgh is a fundamental part of Andrew’s life, where he
has made friends and meets other people. David says that Andrew’s pottery being on display has boosted his son’s self-esteem and confidence, and that drama classes have allowed Andrew to improve his speech no end.

David says that Garvald is high on Andrew’s list of favourite activities. The organisation and its work have had a positive impact on all aspects of Andrew’s life, particularly his social skills. Staff consistency, David says, has been crucial to enabling Andrew to build close and meaningful relationships. 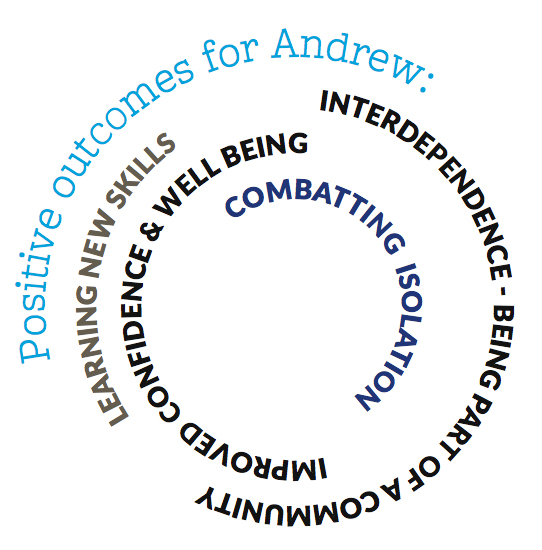